From Sofa to Marathon – Week 3

(actually, I scheduled it before I left…)

I spoke to my doctor last Wednesday about my plans to try and get fit by doing Marathon training, while also complaining to him how I have been coming down with one cold after another, how my neuralgia is not going, and how I’m still utterly exhausted all the time.  I said I am too young to feel this old.

And he said you’re not feeling old, you’re feeling the illness that you are refusing to accept that you have.

I asked him to shoot me, but he said they don’t do that on the NHS 😦

I said I would try and do the training for someone planning to walk the marathon, and he said that that would be a good idea as long as I halved the weekly training and doubled the time allowed until I started to feel la lot better (Luckily I didn’t tell him I was secretly wondering if I should aim for sub 4 hours)

He said that the worst thing about chronic fatigue is getting the balance right… training enough to be of value, but not too much as to spend a week recovering… and then keeping it going week after week when progress seems so slow & even backwards.  It’s certainly backwards at the moment, this new cold seems to be getting worse… sore throat, headaches, cough again….

Seriously, they shoot horses don’t they?

We are off on holiday tomorrow for 2 weeks, hoping to be lovely and warm on the Red Sea in Egypt!  I expect to come back utterly rested and revived.  I don’t think I’ll get to blog my progress as I doubt the WiFi is super, but there will be hundreds of photos on my return 🙂 back in 2/3 weeks!

So progress so far:

0 miles, 0 hours training,  days of taking Wilson for dog walks 🙂 (Not very long or difficult, but at least outdoors!)

Writing it down at least.  My eating has been dreadful.  Fuelled by feeling horrid due to illness & not wanting to eat as I feel sick, plus knowing that I am not getting any exercise, plus poor self esteem due to being ill for so long my food intake has been terrible.  As I said, at least I have been writing it down.  I hadn’t even been eating fruit this week.  My appetite had completely gone but finally on Friday I started eating normally again, and managed to wolf down two full sized portions of Melanzane Parmigiana (baked aubergine) that I made from scratch!  Very impressed!  I can’t believe I never tried to make this before, although it is a bit messy as you have to fry lots of aubergine, it’s a simple recipe and tastes scrumptious!  Followed massive dinner with sweets, chocolate, half a melon & then some Ben & Jerry’s Fish Food Ice cream!

I must be getting better 🙂

My target for next week:

Exercise daily on the sun lounger 🙂

Continue to eat properly (we are getting half board, and not having to cook is half the battle) 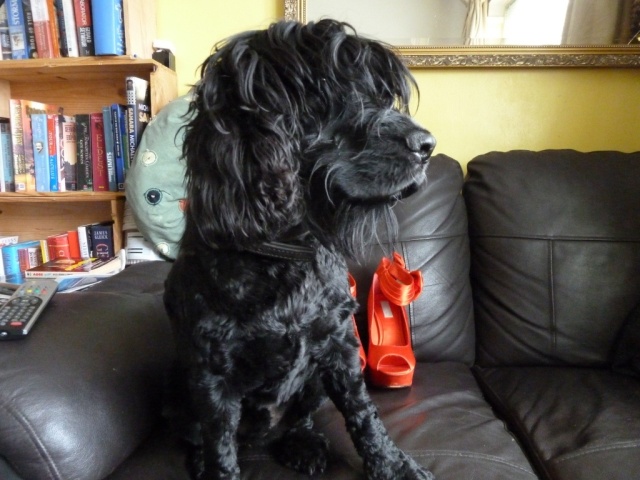 Wilson on our sofa

PS Wilson is not coming….. he’s with his pet-minder.  I’m not sure who is more upset, Wilson or Peter

8 Responses to From Sofa to Marathon – Week 3