Wilson has been getting a lot of airtime recently, so for the third week of Michelle’s weekly pet challenge here is a picture of my very first pet, a beautiful and very large tabby who the girls christened ‘Tiggles’ as he was very tiger-like 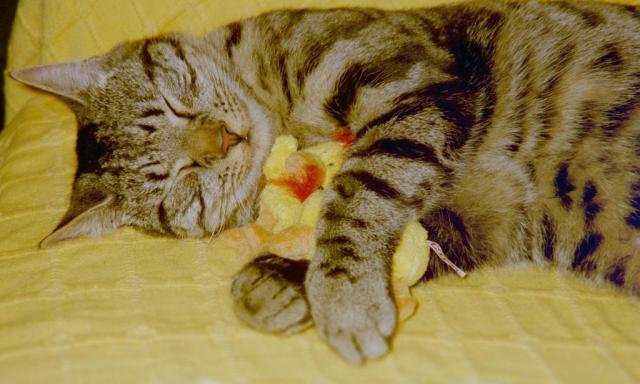 Tiggles had a very soft side despite his size, he could be incredibly cute when he slept, and he always slept on my feet before Wilson came along.  He was a really big cat, with huge paws & really strong teeth & claws, but he never hurt us when playing, it was like he knew his own strength! Whenever he played you could never feel his claws, unlike Lilly who seems to sharpen hers on us!  He was a gentle giant.

Peter was given him by some people who had found him and couldn’t find his owners, they reported finding him to the police but nobody ever claimed him.  When we got him we thought he was about 6 months old due to his size, but when we took him to the vet to have him neutered the vet said he was only 2 months old!

He was always half wild and very afraid of some things, cautious of strangers and terrified of plastic bags.  Whenever we used to come home with shopping he would run a mile!  We think he may have escaped from drowning, hence his fear of plastic bags.

We saw a programme about Scottish Wildcats and he bore extremely similar markings and was similar in size, so we really think he was a wildcat, or descended from one.

Have a look at my gallery of photos and let me know what you think?

Christmas present for the cats! April our Hamster!!

Myrtle was about a year old then, now she climbs over the cat bowl!