I have been saving this photo for a very long time. I took it in Devon one April quite a long time ago. The bridge is over the river Lyn, a beautiful Exmoor torrent of icy water that rushes through a steep rocky valley to the sea at Lynmouth.

As the river races through the valley there is always a very gentle mist of spray, but it is not always visible. In this photo the bridge almost disappears into the mist, and I remember when the photo was developed thinking that the scene hadn’t looked so magical through the lens.

Cameras often capture mystical creatures, faeries, tiny rainbows. I have always loved the mystical quality of this photo…. Maybe the river ‘remembers’ a time when there were no bridges? 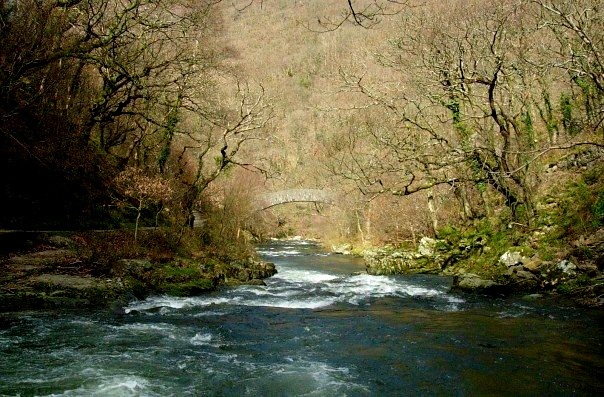 Looking at this tranquil place, it is hard to imagine the devastation this river caused in 1952.

The small coastal town of Lynmouth became known throughout the world for the disaster that struck in August 1952. On the night of the 15th, after continuous rain throughout the day, the East and West Lyn Rivers rose suddenly and filled with the waters from their Exmoor catchment. Large boulders and rocks were carried in the flow towards the village, destroying houses, roads and bridges. Many lost their lives during that dark and terrifying night. The whole of Exmoor was affected and considerable damage was caused on the Barle, Exe, Heddon and Bray but the worst effects were at Lynmouth

To find out more about this weeks Travel Theme, hop over to ‘Where’s My Backpack?‘

This week’s Travel Theme is Mystical