85 years ago today Bill W. took his last drink on his way to Towns Hospital on Central Park West in New York City for his final treatment for alcoholism. He would come to have a spiritual experience at Towns while undergoing treatment with Dr. Silkworth. The experience contributed to Bill co-founding A.A. in 1935 and staying sober until his death in 1971.

How about we go for a run?

Woody, lets go for a run!

Last September I started a PgDip in Therapeutic Radiography (treating people with cancer and some other conditions with radiation).  It’s a 2 year course, 12 weeks in university and the rest of the year we learn on the job in a hospital.  I’ve just finished my exams so now I have a few weeks off before I start 2nd year! (as long as I pass my exams!!)

Anyway, while I was studying, I had nightly cravings for Ice Cream. Specifically Ben & Jerry’s Phish Food! It has little chocolate fishes in it!!

To make it even more calorific, we added ½ a tub of yogurt to it, and some crumbled digestive biscuits!

Needless to say I may possibly have put on some weight, but I consoled myself that I would have plenty of time to exercise after my exams!  My exams finished on Thursday last week, so on Friday I decided to make a start!

Its a long time since I’ve done any running (Long ago, as my Nana used to say, I ran for a club, but that really was long long ago!)

A Long Long time ago!

I really was quite fit back then!

A friend of mine started running about 8 years ago, and now regularly completes triathlons!  I would love to do one, but I can only swim the breast stroke so I don’t think I could manage the swimming bit!  This year he has also done several marathons including the London & Brighton marathons, in preparation for a monster race!  He has just completed the Comrades Marathon in South Africa for a 2nd year. Only 55.1miles!!! It is the world’s most brutal ultra marathon, and even though it’s winter in South Africa in June, the temperature is usually in the 20’s!  To make it even worse, if it takes you more than 12 hours to finish it you don’t even get a medal!!

I don’t think I will go that far… but I do still want to run a Marathon! It’s been over 3 years since I made that decision, and even though I’ve started training a few times, I’ve never got much past 3 miles.  This time I hope I will manage to get a bit further!

Anyway, the day after my exam, (Friday before last) I started. I downloaded an app to give me some guidance, because left to my own devices I would run 15 miles on the first day & then not be able to move for a month & then give up!  It was hard!  I came back looking like a beetroot, but I did it!  Then I did another run on Sunday, and have managed to do 7 runs since then including one in a complete downpour, and Woody has come for all except 2 of them!

We got a little bit wet!

I’m not however expecting to lose any weight any time soon!  I am counting the calories that I am eating just to see how bad things really are, and despite cutting out processed sugars like cake, chocolate & ice cream, I still seem to manage to sometimes eat double my recommended calorific intake for the day!

It seems like this is going to take time 😦 That’s the problem with getting old.  Getting fit takes SO much longer than it used to!!

Anyway, watch this space!  I really do want to run the Clarendon Marathon, a cross country marathon from Salisbury to Winchester along the ancient Clarendon Way with a few extra turns here and there to make up a full 26.2 miles. More than 90% is off road, with the trail following country tracks and paths – many of which have not changed since being traveled by the ancient Kings and Queens of England.

Today I managed 3.4 miles, which is quite an improvement from my first run which was 1.8 miles! Now… time to tackle the garden!

Some friends Woodrow met on our walk today! 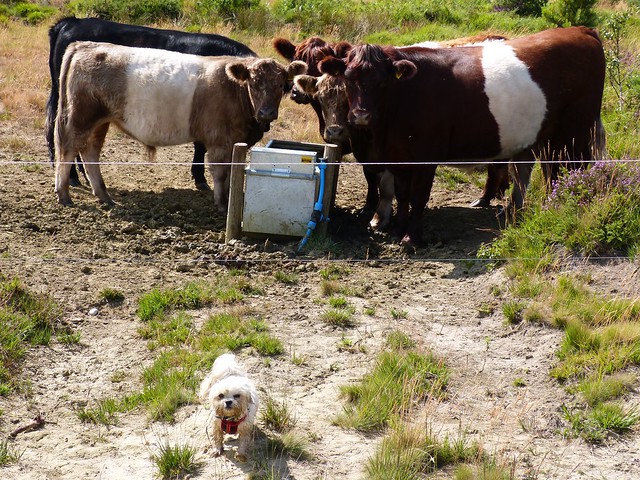 Say hello to my big friends!

Woodrow goes for a swim

Woody is usually white & very fluffy, especially after his bath, however today when Wilson went flying into the river after a stick, Woodrow followed!

Rather smaller not so fluffy dog

Then he wanted me to pick him up! Luckily it was not very cold today so he was pretty dry by the time we got home.  He will need another bath now though.

Spring has been springing, and I have been out in the garden recently for a few days without a coat, but not today!  Temperatures down in the single figures again, a biting wind & drizzle on top.  We felt very guilty taking Woodrow for a walk today in the cold, so we bought him a little coat on the way home 🙂

Woodrow, a little friend for Wilson

I Haven’t had a chance to post on here for ages, I’ve been doing a photography class & we have lots of homework, my youngest daughter is going to University in October & we’ve been visiting lots of different ones… I decided to go back to university myself and will be starting a new course in October, we were on holidays in Egypt and to top it all, we just got a new puppy!

While we were away Wilson stayed with a dog minder who has two other small dogs & peter thought that Wilson was missing their company when we came home, so we went looking for a little dog to keep Wilson company.  As soon as we set eyes on Woodrow we couldn’t resist!

Here are some photos of his first few weeks:

Pick me up! I’m not muddy honest!

First time on a beach

Pick me up please! I don’t want wet feet!

Wilson & Woodrow snuggling up after a long day

How to Be a Ladyperson at the Holidays: 10 Important Tips

This is how we should dress this ‘season’
I particularly love ;
Show off all your many dimensions at once. When planning outfits for your holiday soirées, think: “I’m an heiress and an Italian professor at this upscale tropical funeral.”

And “Pants are for suckers! Merry Christmas”

Straight from the ad pages of your favorite magazines, here’s your guide to being a girl in December. Take notes.

If you play your cards right, your sensitive, goateed dad/boyfriend/professor will reward you with a pair of socks made out of his extra sweater sleeves.

Show off all your many dimensions at once. When planning outfits for your holiday soirées, think: “I’m an heiress and an Italian professor at this upscale tropical funeral.”

All around you are skyscrapers made of bricks and iron and glass and ouchy things. They’re all pointy and hard. But not you. You’re a soft pink flower in a gentle haze of light. Everything around you is blooming, because you breathed springtime into winter. You’re a superfresh candypants sugarblossom.

Wish we were back there again

View of Queenstown across Lake Wakatipu

In January last year we went to Australia & New Zealand to visit friends and family in Perth, Melbourne, Sydney and Queenstown.  As the weather gets colder her it is easy to miss the heat of Perth, the warmth of Sydney and Melbourne, and the alpine-summer like temperatures of New Zealand.

Even easier today as we are expecting the arrival of Peters first grandchild any-time shortly, but he will be born in New Zealand.  Sometimes it’s really hard to be on the other side of the planet!  I’m only going to be a step-grandma (phew!!), but even still its really exciting!!

In response to The Daily Post’s weekly photo challenge: “Gone, But Not Forgotten.”

One of the buildings that my dad wanted to see when he was here in London last week was the ‘Walkie Talkie’ building, because of its unusual shape

This building has a major design flaw however, and it’s not that the fact that it is top heavy.  During the summer this building burnt a car! END_OF_DOCUMENT_TOKEN_TO_BE_REPLACED

Once again I feel like the daily Post has been following me around as I take photos!  I took these pictures while I was walking around London with my Dad last week.  The water running down the middle of the street drew our eyes to the far distance END_OF_DOCUMENT_TOKEN_TO_BE_REPLACED