I love bridges, I am always photographing them when I get a chance.  They make good subjects as their lines draw the eye into the distance and give a three dimensional feel to the photograph.

The first time we went to India we were lucky enough to go on a rail trip from Kerala to Goa, via the Konkan Railway.  As anyone who has made this journey will tell you, it is an experience not to be missed.  We had booked our trip through a travel agent in the UK and the train journey was included.  Our seats/berths (as it was an overnight journey) were second class air conditioned, which were incredibly comfortable and really lovely.

Our carriage comprised of six seats, and the beds folded down in the evening after dinner.  We were sharing our carriage with a lovely Indian family who showed us the ropes and helped us order our dinner when the waiter came round.  The waiters take the orders for the whole train, and then phone ahead to the next station where the meals are prepared and then loaded onto the train ready to be served when we get to that station.

Every half an hour or so a ‘Chai Wallah‘ would come through the carriages selling tea or coffee (milk and sugar already added) so there was never a shortage of drinks, but my husband did go exploring with the dad from our carriage in search of a sugar free black coffee, and was brought to the kitchen carriages of the train where the chefs were cooking huge saucepans of curry rice & dhal, and lots of other delights.

Although the railway has been designed for high-speed traffic of 100 miles per hour, the fastest train on the route, the Trivandrum Rajdhani Express, at present runs at a maximum speed of 68 miles per hour, and our train rarely exceeded 40 mph.  There were regular non scheduled stops for cows, people and traffic on the line.

At one point we crossed a really long bridge, of which I later took a photograph; 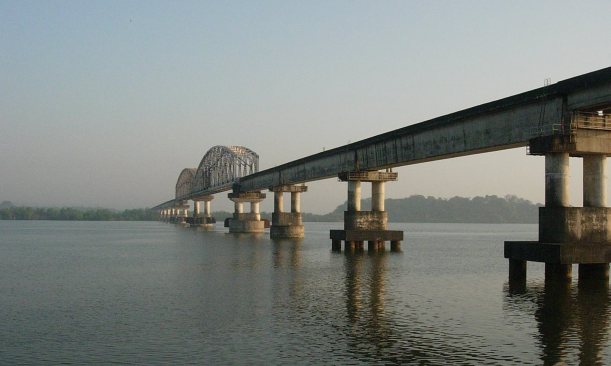 This is the Zuari Bridge which carries the Konkan Railway over the tidal part of the Zuari River, south of Carambolim. The bridge was completed in three years and is nearly a mile long! (1,319 metres)

Chris Tarrant also enjoyed a trip on this railway, and had a very similar experience to us.  You can have a look at his trip on Channel 5’s Extreme Railways