I have realised I’m only getting to post once a week at the moment which isn’t anywhere as often as I would like.  I’m only working 2 days a week, but I keep getting asked to do extra days so that usually ends up as 3.  Even still, it doesn’t feel to me like I have 4 days off a week at all!

I have been experimenting with my camera a lot more, but I haven’t had time to look at, let alone post the photos I’ve been taking!

Having almost grown up daughters who can be left to their own devices a lot of the time, one would think that the school holidays would not be as labour intensive as they used to be, and indeed they aren’t by any stretch of the imagination, but still there are outings, shopping trips, preparations for university and college to be done, and the ever-on-stand-by taxi service that is apparently available any time I am ‘not at work’ 🙂

I had a perfect photo ready for last week’s Travel Theme, but by the time I went to post it, this week’s theme was already out, so I have posted it anyway & will wait until tomorrow to post this one!

These photos come from a visit to Buscot Park near Lechlade where we went with my cousin for her birthday.  The gardens are full of walks, many of them radiating in straight lines out from the house but over an undulating landscape.  Along the walks are interesting sculptures, and there is even a swinging garden with 4 swing seats around some stunning flowerbeds.

At one end of one of the walks there appeared to be a waterfall which also appeared to be a mirror.  It was hard to tell, from up close to the sculpture and we weren’t able to get close enough to inspect it.

At the other end of the walk however, we were at a different height, and with the aid of a long zoom on my camera I was able to capture a photo of the ‘Faux fall’ and work it out to some extent!

The Waterfall in the distance 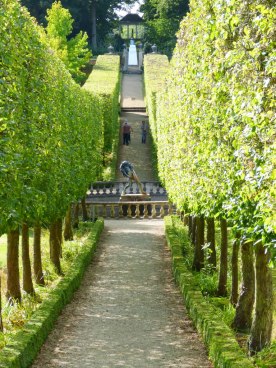 Or is it mirrors

Here’s a few more of my photos, click on any of them to see a larger image;

Here is what the Head Gardener had to say about the sculpture;

The new water feature is called the Faux Fall by artist and sculptor David Harber, commissioned in 2007 by the present Lord Faringdon. It consists of a series of highly polished steel vertical panels in graduated form and height over which water is pumped and which when viewed from across the the opposite descending stairway to the Four Seasons Walled garden appears like a cascade.

To see other entries to this weeks Travel Theme , hop over to ‘Where’s My Backpack?