I love Sinéad O’Connor, I always have.  When I first heard ‘Troy’ the haunting love song from her first album, The Lion & The Cobra, she was singing from my heart, from my soul.  She screamed for me, from me.

As a lover of Yeats’ poetry, and as a child born and raised in Ireland, I understood the symbolism of the lines, I knew too the places about which she sang. 2 years her junior, I was there.

I remember it,
Dublin in a rainstorm,
sitting in the long grass in summer,
keeping warm

I too remember it, to be fair even the warmest days in summer in Dublin are rarely warm, and Irish people carry umbrellas pretty much all year round.  It rains. That’s why the grass is long in summer.  In London it is usually brown and parched.  As I walked through Dublin last Monday with my dad, the line that kept running through my head was ‘I remember it, Dublin in a snowstorm‘

Troy was not her most popular song from that album, but it is mine, and although I love many others of her compositions and arrangements since then, including the wonderful ‘Nothing Compares 2 U‘ by Prince, I still hold Troy as my favourite.  Maybe it’s because I was that age, maybe it was because I also loved the children’s story ‘The Phoenix and the Carpet‘

Since the Lion and the Cobra I have always bought all of Sinéad’s albums, and I have followed her public profile, sometimes proudly, sometimes sadly, for at times she opens her heart too much to the public, who in general do not really care.  She makes extreme gestures and statements, and then appears confused and hurt when she is then rejected by those she criticizes.  She wears her heart on her sleeve at times, on the internet, in the papers, on television… and yet as soon as she generates an interest she cries out to be left alone by the press.

A woman of extremes, a contradiction in her own skin, an egoist with an inferiority complex. A mother, a child, a lover, a girl, a woman, a leader, outraged, shy. I know her well.

I am so lucky I have found a solution to the insanity inside me, I have found peace.  I hoped that she would find peace in her spirituality, but she doesn’t seem to have found it yet.  I pray she does, if not, she might die.  I nearly did.

My favourite album of hers is Universal Mother, probably because she released it as I became a mother, and as she did for the second time.  I used to sing the songs to my children as lullabies.  They have had no choice but to be huge Sinéad fans 🙂

This song written by Phil Coulter never fails to bring a tear to my eye: Scorn not his simplicity

When I heard Sinéad’s new album How about I be me (and you be you)? was to be released near my birthday, I asked for a special edition of the album incorporating 2 CD’s, one of a concert in Dublin and Reykjavik and a DVD of exclusive video content, a booklet of background information on the album, and contributions by John Grant who wrote the song Queen of Denmark featured on the album, and her proud big brother, Joseph. The booklet also contains lyrics of the songs, and a poster of the picture on the cover ‘Upon small Shoulders‘ by Neil Condron

I completely love the picture on the front of the album, and without knowing anything about the painting or the meaning behind it, I felt that the picture represented Sinéad beautifully, and what she wanted to say with this album.

It was only when I was in Dublin this time, that my dad showed me a postcard of this photograph, that I realised the meaning behind the painting.  On the reverse it says:

Ireland’s economy spiralled into the abyss as a result of corporate arrogance, individual greed and negligent governance. The burden of our shattered economy and massive debt has become our children’s legacy.
This large oil painting (7’x3’) depicts a small child sitting precariously on rusted scaffolding with the Irish tricolour draped behind her. The old scaffolding of an unfinished property development represents the remnants of Ireland’s ‘Celtic Tiger’ boom. The little girl represents the children of Ireland left vulnerable and destitute with a crippling burden to carry as a result of greed and negligence. The flag ‘our brightest colours’ is Ireland, her heritage.
Her expression however isn’t one of fear and her posture is confident and defiant.
She is captivated by something that has distracted her from her plight and her outstretched arm gestures to the viewer. What she is looking at and the meaning of her gesture are for you to interpret.
I hope you enjoy it.

I love it even more now!  Wanting to know more, and realising that Condron’s studio is not far from where my parents live, I was eager to visit his studio in the hope that he might be there.  Indeed he was and he talked with us about the painting and even signed one of the postcards for me (and another for my dad with a special birthday message).  It turns out that Sinéad bought the painting from him in 2011, and then following the release of the album she sold the painting in aid of the Irish Charity ‘Penny Dinners raising €19,500

Neil outside his studio in Enniskerry, with a print of ‘Upon Small Shoulders’ in the window, beside a portrait of the tiny model’s beautiful red-headed sister Georgia 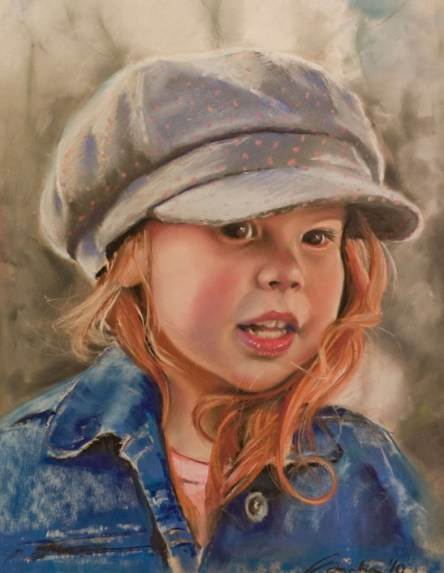 Georgia, sister of Tia featured in ‘Upon Small Shoulders 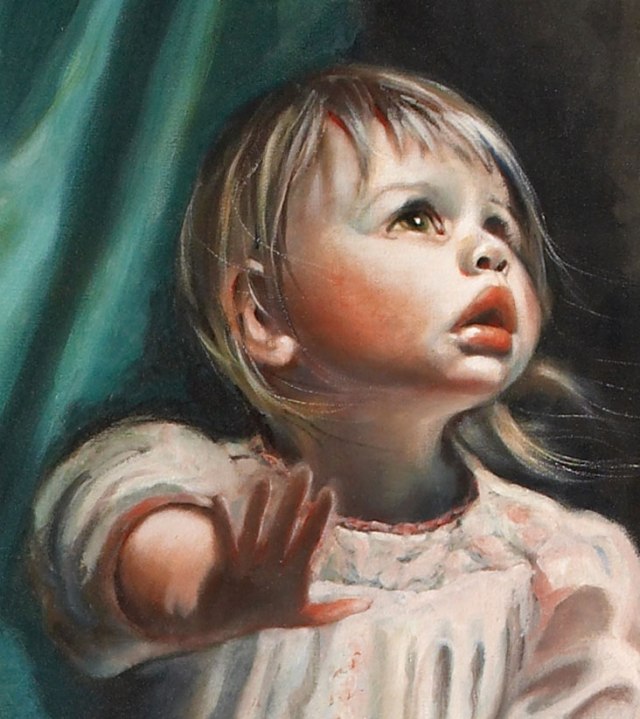 A cropped section of ‘Upon Small Shoulders’

My header image has been changed to reflect this post.  The view is from my parent’s bedroom window.  In my childhood this area was all fields, and then became developed as an environmentally friendly low rise industrial estate during the 1980’s.  Microsoft (a company we had not heard of in the ’80’s) set up a huge headquarters there, and local people who worked there then and stayed long enough, made quite a killing on employee share schemes.

During the Celtic Tiger, Microsoft sold off their land for a small fortune and developers moved in.  For years the place was known locally as ‘craneland’.  Many buildings stand now unfinished, and property owners are straddled with massive debts and negative equity that will take decades to clear.

Born in Dublin, living in London with Peter, my two daughters, Wilson our Spaniel & Woordow our Malshih (Shih Tzu-Maltese cross)
View all posts by Barbara →
This entry was posted in Daddies, Dublin, Music, Photography and tagged Debt Crisis, Greed, How about I be me (and you be you)?, Neil Condron, Sinéad O'Connor, St Patrick's Day, The Celtic Tiger, The Lion and The Cobra, Troy, Upon Small Shoulders, WB Yeats. Bookmark the permalink.

37 Responses to Upon Small Shoulders